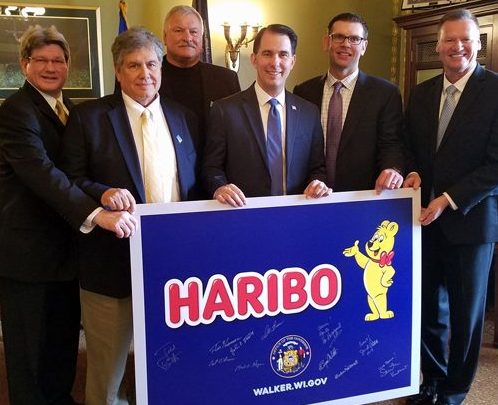 Two of the Wisconsin Economic Development Corporation’s largest financial incentive projects in 2017 were in Kenosha County.

Both Haribo of America, a new division of the German gummy candy maker, and Gold Standard Baking, a Chicago-based bakery, announced the development of new production facilities in 2017 that would create more jobs and capital investment in the region.

The two Pleasant Prairie companies were among WEDC’s top 25 economic development projects for the year.

Haribo was third on the list, with an estimated total project cost of $220 million that is expected to create 385 jobs. WEDC said it would invest $21 million in tax incentive credits to the company, based upon meeting investment and job creation benchmarks.

Haribo announced plans to build in Pleasant Prairie this past spring. The village approved a land purchase agreement with the company on a 137-acre parcel earlier this month.

Prestige Metal Projects relocated from Antioch, Ill., to an 85,630-square-foot building in Bristol. The relocation is expected to create 46 jobs. The estimated project cost was $4.2 million. WEDC granted the company $165,000 in tax credits.

WEDC said this year southeastern Wisconsin had 40 percent of the state’s largest economic development projects, with Foxconn as the largest with an estimated $10 billion project cost and the creation of 13,000 jobs.

“Kenosha County played a key role in the great economic success the state of Wisconsin achieved in 2017 with three projects landing in the top 50,” said WEDC spokesman Mark Maley. “A reliable infrastructure, proximity to both Milwaukee and Chicago and an outstanding workforce are among the many reasons Kenosha County continues to attract companies from all over the world.”

“The fact that a global company like Haribo chose Kenosha County for its first North American manufacturing facility speaks volumes about all the county has to offer,” he added. “This is a game-changing development that will benefit the county and its residents for years to come.”

“The importance of the Kenosha Area Business Alliance and Milwaukee 7 regional economic development organization cannot be overstated when it comes to attracting businesses to the county or working with existing companies seeking to expand their operations here,” he explained. “Attracting companies like Haribo takes a coordinated effort on the part of state, regional and local partners — and that’s exactly what we see in Kenosha County on a regular basis.”