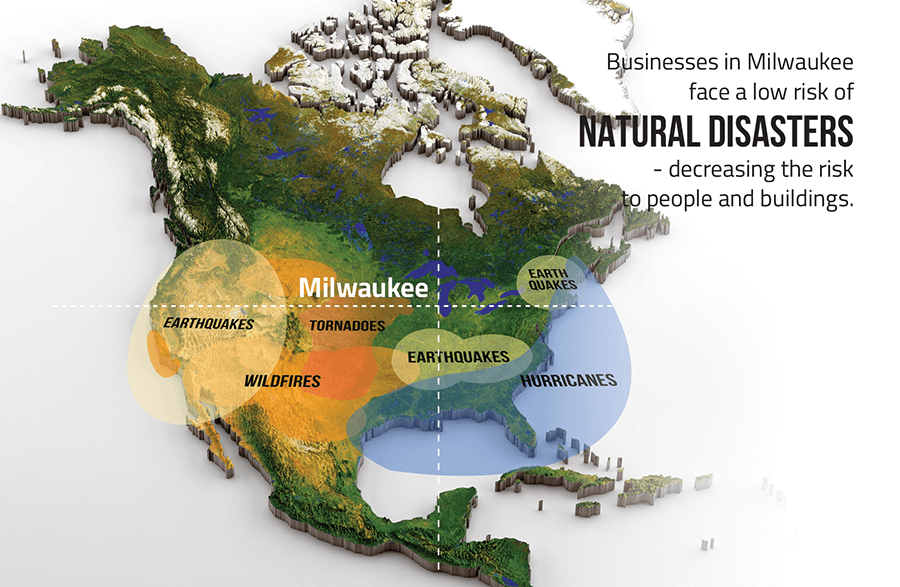 Selling the Milwaukee Region as a ‘climate haven’

Posted in Community News, Kenosha County Economic Development
Amid frequent national reports about forest fires, intense weather events and water shortages, the Milwaukee Region’s value proposition of being relatively free from the threat of natural disasters is becoming more relevant by the day.

As part of its core pitch to selling the seven-county Milwaukee Region to executives and site selectors interested in relocating or expanding their business here, representatives from the Milwaukee 7 Partnership for Economic Development often note that our region is relatively free from the threat of natural disasters and features reliable access to fresh, clean water.

That level of predictability would be an attractive proposition for any business leader under any circumstances. But amid frequent national reports about forest fires, intense weather events and water shortages, this aspect of the Milwaukee Region’s value proposition is becoming more relevant by the day.

Concern about the long-term effects of climate change has spread well beyond the realm of scientists and activists. Even the U.S. military is revising its strategy, recently releasing a plan to “train a generation of officers on how to prepare for a hotter, more chaotic world,” according to a story in the Washington Post.

In this context, the concept of future mass migration from regions under threat to regions that are better positioned to withstand the worst effects of climate change is gaining national traction – and highlighting the Milwaukee Region’s role as a potential “climate haven.”

A recent CNBC story defined climate havens as regions that are “situated in places that avoid the worst effects of natural disasters and have the infrastructure to support a larger population.” Jesse Keenan, an associate professor of real estate at Tulane University, listed Milwaukee and Madison as two of a relatively small number of cities – mostly in the Upper Midwest and Northeast – that are poised to benefit. Watch the story > on CNBC’s website.