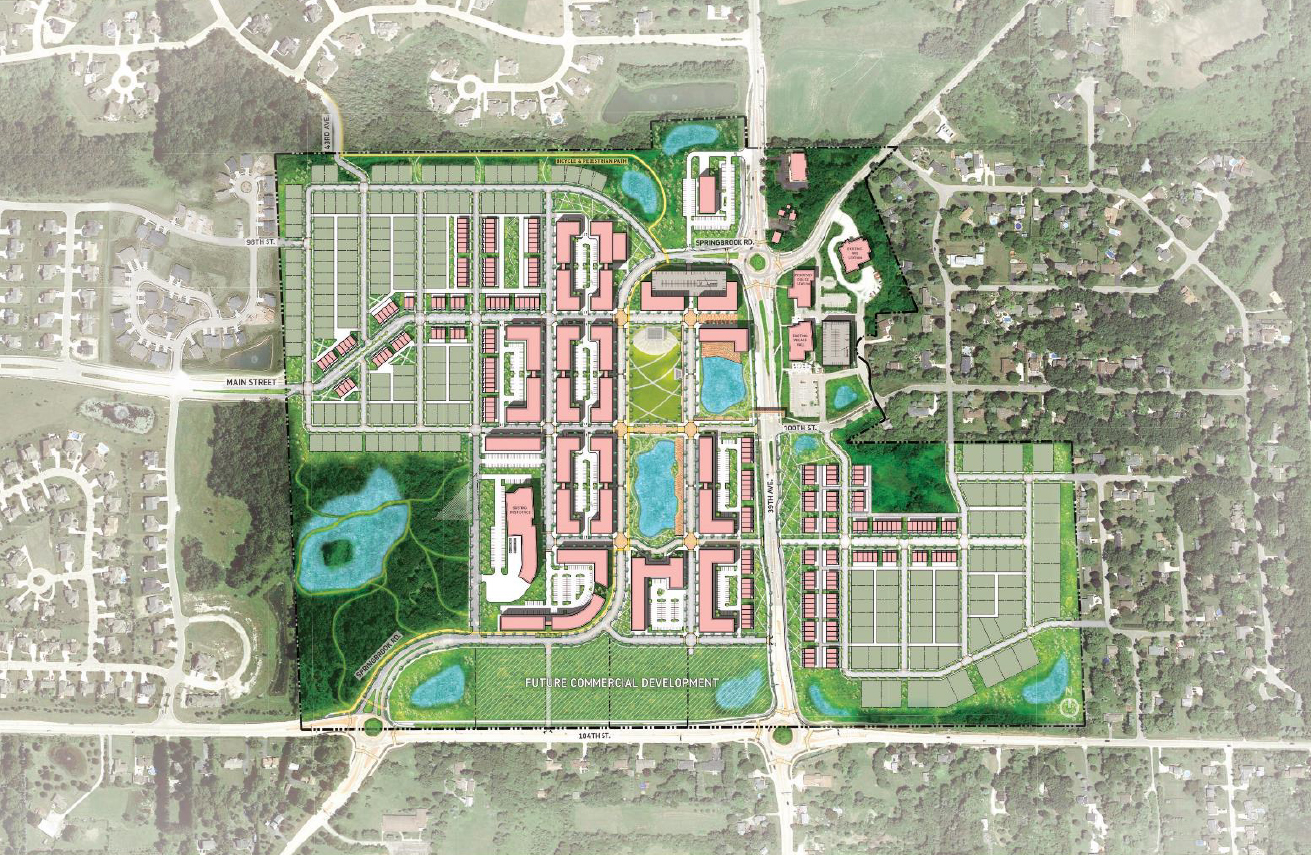 On March 28, the Pleasant Prairie Village Board considered and approved the revised Master Conceptual Plan for the proposed Village Green Center (VGC) mixed-use development of approximately 180 acres of land, generally located at Springbrook Road, 39th Avenue, and State Highway 165. Public discussions for a Village Center began more than twenty-five years ago. Over the years, Village staff has gathered community feedback and worked to create a plan for a downtown community space that fits into the surrounding communities and offers amenities for residents and area visitors.

The Village Board initially considered the revised plan in December 2021. The updated Master Conceptual Plan reduces the residential density from an earlier concept, lowering the residential units from 533 to 380 units in the western and eastern portions. It also illustrates potential locations for up to 75,000 square feet of commercial development around the central open green space. The overall plan received Village Board support in December; however, before moving forward, Board members requested the Plan Commission review the new proposed density and the demand for retail in the area.

The Village Plan Commission reviewed the updated Master Conceptual Plan on March 21 and gave a favorable recommendation for the plan to the Village Board. The plan includes a combination of high, medium, and low-density residential housing and mixed-use, civic, commercial, and hospitality developments. It consists of a central green space with pedestrian-friendly connections that provides a community gathering space and encourages walkable access to housing, commercial, and event spaces. The higher-density commercial buildings are planned for the central area of VGC. The density then transitions outward, reducing the number of housing units, creating various housing types that fit into the surrounding community and offer a range of housing price points.

RINKA (architects, planners, and designers) developed the overall Master Conceptual Plan from ideas generated in 2019 by the Community Collaboration group and feedback from the 2020 Draft Master Conceptual Plan. Over the past two years, Village staff has worked with RINKA to ensure key design drivers were maintained and determine the viability of project components. The updated plan incorporates Village Board recommendations to reduce retail space and Plan Commission recommendations to reduce the number of housing units at the perimeter of VGC.