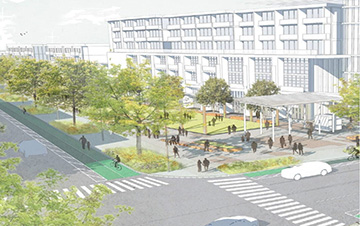 The sprawling former Chrysler plant property in Kenosha has been both a riddle and a place for dreams.

Once a busy production hub that employed 10,000 people in its heyday, the plant closed in 2010 when the auto manufacturer filed for bankruptcy.

Two years later, the city, with the help of state and federal funding, began a $30 million effort to demolish the buildings and clean up contaminated soil and water on the site.

Now city and business leaders have an ambitious multi-million-dollar plan to transform the 107-acre property, located east of 30th Avenue between 52nd and 60th streets, into the largest innovation-focused, mixed-use development in the state.

“When you look nationally, there have been research parks all over the country, the next stage of those is innovation districts,” Tim Casey, director of city development for Kenosha, said of the plan, which calls for 1.5 million square feet of commercial space, green space and 800 to 1,300 apartment units.

Dubbed the Kenosha Innovation Neighborhood, the development would be similar in scale to Drexel Town Square in Oak Creek, Casey said, but “driven by a mission to retain and attract the next generation of people and talent from Kenosha, the region and the world.”

City leaders are hoping those entrepreneurs and would-be corporate partners will be drawn to the site by two initial developments: a 60,000-square-foot incubator called the Innovation Center and the new Lakeview Technology Academy building. A Kenosha Unified School District choice high school that has operated in partnership with the Kenosha Area Business Alliance since the late 1990s, the STEM-focused Lakeview is currently located in Pleasant Prairie. Leaders are working to have the campus relocated to the KIN to build a better, bigger building and reach more students in the process.

“The city’s vision for the redevelopment of the site is as an innovation neighborhood, so having the area’s top-performing school (which happens to have a STEM focus) as one of the anchor tenants for the development seems like a very solid building block and foundational piece,” said Todd Battle, president of KABA and vice president of the KUSD school board.